There’s More to the Core Than Abs 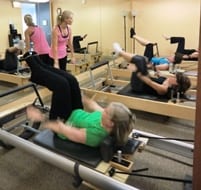 When you hear the term “core,” I think it’s given that the abdominal muscles immediately come to mind.  Beyond that, the association makes a beeline for the concept of strengthening the spine and back muscles.  And if you’re Pilates savvy, you also know that the Pelvic floor and diaphragm are integral to the core.  So, when I say “there’s more to the core,” what’s the missing puzzle piece?  Introducing the Psoas (pronounced “so-as”) muscle.

The Psoas Major (there is also a Psoas Minor, but interestingly, it only exists in roughly half of the human population 1, and for our purposes here, we’ll focus on the major) – is the only muscle that attaches directly from the spine to the lower limbs and is usually grouped with the hip flexors.  The Psoas is crucial in helping to stabilize the spine, and if imbalanced, can contribute to lower back, sacroiliac and/or pelvic pain.  It’s not often mentioned when being cued generally in class – ever hear the instructor say – “let’s get that psoas pumped up” – probably not.  But because of its deep effect on posture and geographic orientation to our center, it absolutely makes sense that it is considered in programming for core training.

The Psoas originates from the transvers processes of each lumbar vertebrae I-V as well as the lumbar discs.  From the spine, the muscle fibers, buried deep near the body’s midline, dive down into the pelvis to meet up with the Iliacus muscle.  After slinging over a part of the pelvis referred to as the inguinal ligament, they attach to the upper femur (your thigh bone) at a spot called the Lesser Trochanter.  The muscle is really located behind the contents of the abdominal cavity and cannot be seen at the surface like the “sexy” six-pack we give so much credit to for a strong core.

In action, this muscle assists in flexing, as well as rotating the femur externally (like when you turn out your feet from the hip).  It has some responsibility for bringing the trunk closer to the leg – as in sitting up or flexing forward.  So for instance, it teams up with the abdominals during the Pilates Roll Up exercise.  It also plays a part in the act of side bending the spine.

More importantly, however, a supple and healthy Psoas has the role of lumbar stabilizer – a vital component to core work!  Our modern lifestyle through precipitates a greater percentage of sitting during our waking hours.  Without awareness of alignment and posture, the Psoas ends up working overtime, weakening and losing efficiency in carrying out its job.  The lower back can’t rely on it for support as it loses elasticity; and then pain and compensatory patterns ensue that can cascade to other parts of the body such as the hip and knee.

Another significant aspect about the Psoas is its relationship to the fight/flight/freeze response, and association with your ‘gut instinct.’  The deep and protected central location of the Psoas is perhaps why it’s linked to storing deep emotions, trauma or stress.  Of course we can’t help that life events occur and if not released through some outlet, triggered stress can build up internally.  So, beyond external conditions, this can have meaningful impact on the state of your Psoas.  In other words, the Psoas is not just anatomically a core muscle for movement– consider it part of your core being.

So how do you relieve a tense Psoas?  Therapeutic touch with a skilled massage professional whom you trust is one way.  But if you’d like to try addressing it on your own, – the Psoas can be gently and non-invasively addressed in an exercise that utilizes gravity’s help while lying supine on the floor. NOTE:  This exercise is on the opposite end of the spectrum to the idea of intensity core training.

It’s not hard work – but it might require patience to do use this method called the constructive rest position (youtube video, 4:44).  I love this approach to releasing the Psoas, because in effect, it embodies the idea of balance – taking the time for recovery by mentally addressing your core being and physically allowing the body’s center to release.

Free up the Psoas, and then you’ll be refreshed and ready for a more effective Pilates workout.  See you in the studio!