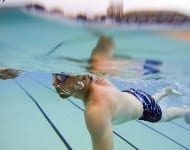 What do you do approximately 20,000 times a day without even thinking about it?  Breathing is possibly the most important and essential function of the body.  Oxygen flows in, and we make the exchange, eliminating the carbon dioxide waste.  Breathing is linked with the mind-body connection and is also, not surprisingly, one of the 6 Pilates Principles.

We can breathe without having to think about breathing. And our breathing patterns change quite a lot throughout the day.  The pattern is influenced depending on the task in front of you and the condition of your abdominal cavity.  When you’ve just had the first cup of coffee in the morning is different from when you’re stuck in traffic on your commute.  Watching a daring episode of Sherlock Holmes versus going out to dinner and feeling full in the tummy.

Your inhalations and exhalations in volume, frequency and regularity are all affected.

The act of concentrating on your breath for just 5-10 minutes can help re-calibrate the system.  Drawing inward to focus, physiologically allows you to

In Pilates, focused Breathing as a principle assists in Centering.  It also assists in creating flexibility and mobility in the spine.  Wait – the act of Breathing mobilizes the spine?  Yes, it’s true.

A faulty breathing pattern we often see in the studio is the shoulders rising high when a new student is asked to take a full breath.  I think most people know that the 12 ribs (Fig 1) in the human body are attached to the spine.  It’s one of the common problems instructors notice with breathing: that the spine and the ribcage aren’t as active, and so less efficient in respiration – and in movement.  Postural habits can inhibit not just the spine, but also the ribs – and therefore your ability to breathe efficiently.  To effectively do that thing you do 20,000 times a day!

Yogi Cameron Alborzian stated “……breathing plays such a significant role on the path because it uses the lungs of the body to positively affect the centeredness and presence of the mind. When we breathe properly, we are less affected by our emotions and are able to conduct ourselves with presence and focus.”

Rib Tip of the Day.  So how does the breath mobilize the spine?  It seems most people think of the cage – literally.  It’s true that the ribs protect and support vital organs.  But you might not realize the ‘secret’ relationship of the ribs to the spine.  The ribs are not attached as fixtures to the vertebrae.  Each individual rib has its own joint connection to the thoracic spine on which it can “hinge” a small degree during respiration.  Additionally, the ribs don’t just move from the spine – the spine actually moves with the ribs.  So try this 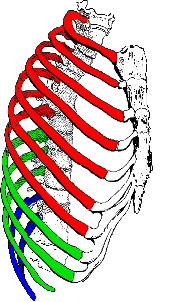 When you inhale mindfully, feel the ribs separate and broaden, and the spine gently goes along that wave into a subtle extension, lengthening and creating space.  When you exhale slowly and fully, feel the ribs close gently, and the spine follows along into slight flexion and compression.  Imagine when you breathe in – you move a tiny tiny bit toward the sky, and when you breathe out, the same tiny tiny bit toward the earth, like waves that lap up and back along the spine.  Pretty cool, hunh?  It’s as if you could give your spine a little breathing massage in just 1-2-3.

*The ribs are not alone in the fundamental act of respiration.  The diaphragm is another key component to the essential act of breathing.  More on that in the next blog!

See you in the studio!